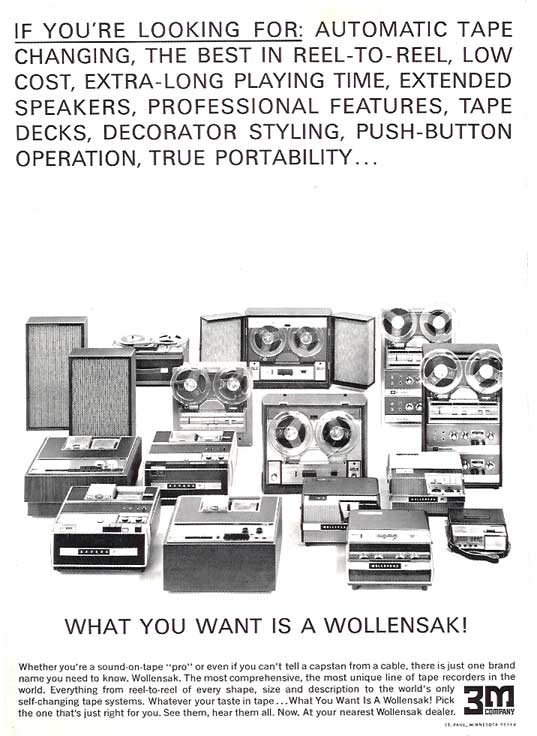 I suppose it might be helpful to write a Wollensak recorder guide while my memory still retains some details. I was a Wollensak Factory Authorized & Trained service facility manager and technician until their end.

Wollensak started out as a lens manufacturer over 100 years ago. They provided lenses and lens components to all the major American manufacturers during the 20th century until the Japanese took over the market. They also made some shutters and formed a partnership with The Revere Camera Company that led to them offering some cameras (mostly 8MM) under their name in the 50s and early 60s.

That partnership with Revere would have profound implications for both companies when Revere, like many other optical companies (Ampro, TDC, Bell & Howell, etc.) of the day (Early 50s) started venturing into making tape recorders. Revere's first offerings were mundane but they came up with a design that was a winner and would remain the basis for their machines for decades.

Enter Wollensak. They took the basic mechanism, designed a modern "aircraft construction" shell to house it, a simple 3-key and slider control system, and a compact amplifier. The resulting unit was small, light, stylish, and an instant hit. The "1500 series" was born.

Over the next few years Wollensak/Revere would make refinements and optional versions of it.

The original T-1500 was a half-track (2-track mono) recorder with a unique (for the time) amplifier, using an interstage transformer instead of a phase inverter to drive its push-pull 12AB5 amplifier. It had Record, Play, and Public Address capability which made it a hit with lecturers, schools, etc. The amplifier is often seen on eBay being sold as a "guitar amp" or other non-tape recorder usage.

3M acquired Revere/Wollensak as a perfect companion to its tape manufacturing business. The division eventually became known as the "Mincom Division" with its headquarters in St. Paul, MN. The new parentage allowed research and innovation. 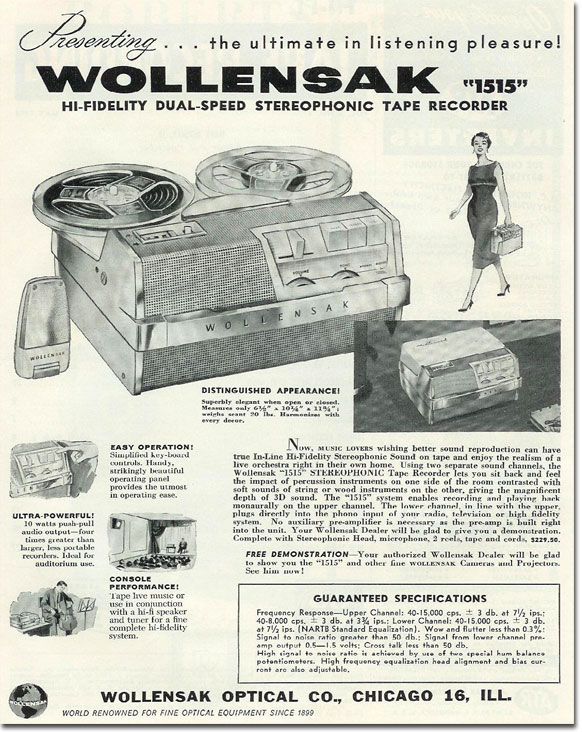 Variations of the 1500 quickly appeared. One of the first was the T-1515, a Stereo version. The 1515 replaced the standard mono head with a stereo head and added a small preamplifier for the second channel. By plugging the unit into a stereo system or adding a satellite speaker/amplifier the then-new Stereo tapes could be played. Recording was still only mono, however.

This was quickly followed by the T-1515-4 as the industry went to 4-track tapes. The head system was redesigned to include the new head and to provide a selector that moved the head up and down. The 4-track setting allowed for playing prerecorded 4-track stereo tapes. There was also a 2-track setting that lowered the head slighly so it tracked 2-track tapes without the loss in channel one that was common to other brands. A 3rd position allowed for recording 4-track mono by shifting the active (recording) poles to the different parts of the tape to accomplish this. Others would adopt this approach too, including Webcor & Akai/Roberts.

Small internal improvements were made, mostly to the idler wheel carriers and later to the rewind arm but the drive mechanism was essentially still the original Revere design.

For the "deluxe" end of the market they redesigned the shell and added pushbuttons and relays to make soft-touch controls and the possibility of remote operation available. The T-1600 & T-1616 were never great sellers but did look spiffy and added prestige.

The demand for mono recorders was falling, however, and what there was for it was increasingly being filled by cheaper units from Japan. Wollensak needed a stereo RECORDER to compete. 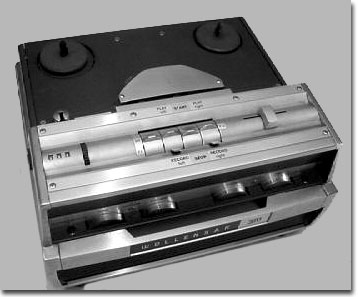 The engineers took the base mechanism and redesigned it to incorporate power-assisted operation and a new 2-channel amplifier. The case got a totally new look and side-mounted speakers. The T-1580 wasan instant success and had fairly good specs for the price. Ads with name musicians appeared in several publications. It retained all the traditional features, including PA ability. A mono version, the T-1570 never caught on, but the 1580 remained in the catalog for a few years.

The 1580 was expanded into a large upright unit seemingly inspired by the popular Roberts (Akai) units of the day. The T-1980 "Sound Room" was mechanically and electronically mostly identical to the 1580 but bigger and more impressive, with meters instead of the neon indicators used until then.

The 1580 mechanism was also used, with different amplifiers, cases, in lower-priced or later models such as the T-1280.

In an effort to keep a foot in the low-end market a totally new design, the T-524 was offered but never did well.

During all this the original 1500 was still selling well, especially to schools and corporations. 3M renamed it the T-1500AV but otherwise it remained pretty much the same until they decided to update it to a transistor (solid-state) amplifier and give it a small meter. It was then dubbed the T-1500SS.

Price had become a big issue for the consumer lines and production costs on the old 1500 mechanism and case had gone up, so a new series was designed for the consumer market - the 5000 series.

The new designs were compact and rectangular. A reel on each side with a small control console between them. They could sit on bookshelves or be hung on a wall. A simple mechanism, plastic parts, and power-operated pushbutton controls made for a lighter unit. All were solid-state. Models ranged from full portables with plastic cases to wooden-cased models with detachable wing or shelf speakers. With the exception of one mono model all were stereo. The first series was the 5200/5300 series (5150 for the mono version) and a later series with mechanical improvements and a headphone jack was the 5700/5800 series. 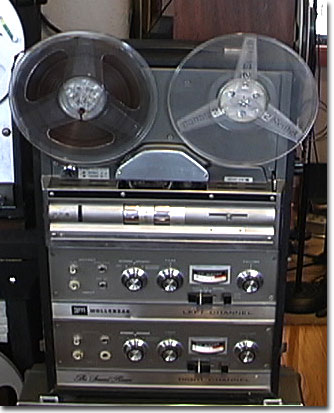 Introduced with them in 1967 was Wollensak's first and only battery portable reel-to-reel offering, the 3500. It was made in Japan and had all the features one could want at the time - selectable auto-level, solid construction, a counter, pushbutton operation, 5-inch reel capacity, and a unique switchable speed system instead of changeable (and loss-prone) sleeves that also changed equalization for the speed selected. It was a good recorder too, with surprising sound quality for the time.

Wollensak also had started offering cassette recorders. The first, the 4100 & 4200 were rebadged Philips (Norelco) units from Holland. Buyers were not thrilled with the odd DIN connectors used, much preferring the standard jacks and plugs used by American and Japanese offerings.

After 2 years 3M gave up on the 5000 series and designed a whole new series from scratch. Nothing was carried over from the original Revere design or updates for the first time.

The new 6000 series featured a diecast chassis and head carrier. A DC motor ran the reels, leaving the AC motor free to just run the capstan, lowering wow, flutter, and speed variations. Simple key controls and open head access made use easier. It was hoped it would replace the 1500 series in commercial usage. The first model offered was a mono unit.

The line instantly expanded to all sorts of stereo units, from simple to 3-head decks and even self-contained sound systems with 3 head recording/playing and 70-watt amplifiers with turntable and tuner inputs in addition to the usual microphone and line inputs. Some were cased to be portable. The best selling of these, the 6250AV found wide use in colleges and music schools.

On the cassette front they came out with the revolutionary "dual peripheral" drive mechanism. This had a huge flywheel and good mechanical specs. A very effective auto-stop was soon added. It had the same controls as the 6000 series. Advent used this transport for its historic 201 deck (the second to use Dolby noise reduction) which kicked cassette stereo into the lead during the 70s. The mechanism would be used by Heathkit for their kit version.

Wollensak offered consumer stereo versions but chose not to make them themselves. Instead, they sent the mechanisms to Japan and had the consumer/Hi-Fi versions done there. Later units would be wholly Japanese.
These consumer versions featured contemporary items including crystal ferrite ("glass") heads. All were flat units and lost out when the industry went to upright front-loaders.

A line of 8-track recorders was also offered, including some nice ones with Dolby. They faded with the format but are much sought-after today.

Throughout all of this Wollensak cassette units, made in the U.S.A., had taken over the commercial market. With one exception they were mono recorders and nearly all had some form of projector control incorporated into them. Like the original T-1500 they were now replacing they had powerful amplifiers and PA capability. They could also program for and control slide projectors and even themselves. They filled language labs, trade shows, schools, and meeting rooms. The 2500 series ruled the market.

During this time the original 1500 design continued to have strong demand. It was updated with a new amplifier that added autolevel recording and got a new green paint scheme and color-coded keys.

Competition to the cassette models began to appear at the low price end of the market so the bi-peripheral design was turned into a smaller version with a smaller amp and speaker to try to plug that hole. They never really caught on.

Wollensak also decided to offer high-speed tape duplicators during the 70s. There were reel and cassette master units and combined Master/Slave cassette models as well as add-on units. The mono 2770 was the most popular and allowed libraries and schools to turn out masses of cassettes for patrons and students in one pass. The stereo 2772 required two passes and was less common.

Wollensak finally had to just cancel manufacture of the 1520AV in 1981. Prices had reached $695 and they were still selling. 3M felt the 6000 units would serve as well and they were cheaper. There was a frenzy to find remaining stocks of 1520AVs when the word went out.

For 1982 the cassette units underwent a redesign and got bigger meters and other refinements. Digital control was added as was a deluxe stereo unit with multimedia features and full digital functions, a new servo motor drive and other features perfect for trade shows and wow presentations. It looked like Wollensak was set for the future. 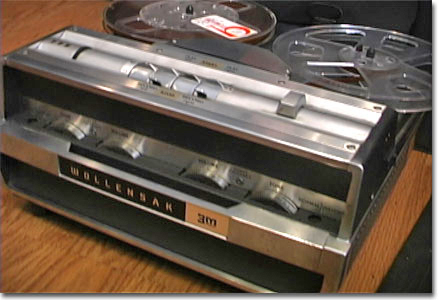 But 3M decided the profit margin on the Mincom Division was not high enough. They had a rule that said that any division that did not return more than 17% at that time was not worth the trouble. Wollensak was put up for sale and acquired by a small company who mainly wanted the duplicator line. A few of the traditional models were offered for a year or so then discontinued. The duplicators continued for a while but competition caught up and eventually they went too.

Left behind was a legacy of innovation and thousands of still functioning products, many of which will turn up here. 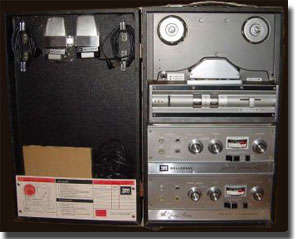 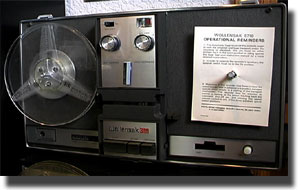 There is no source for parts for these orphans other than belts.

The above summary used with the author's permission 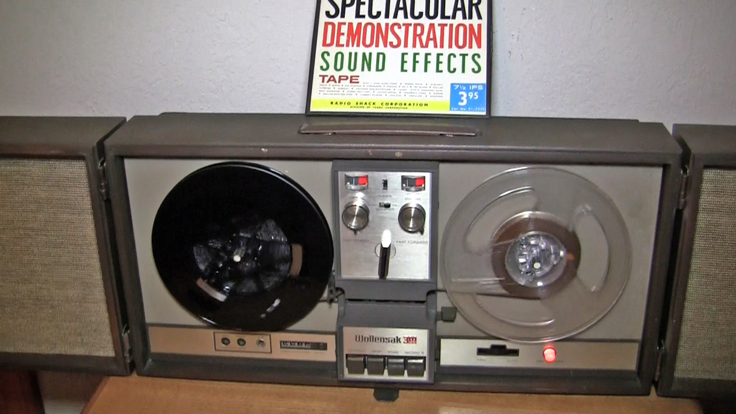 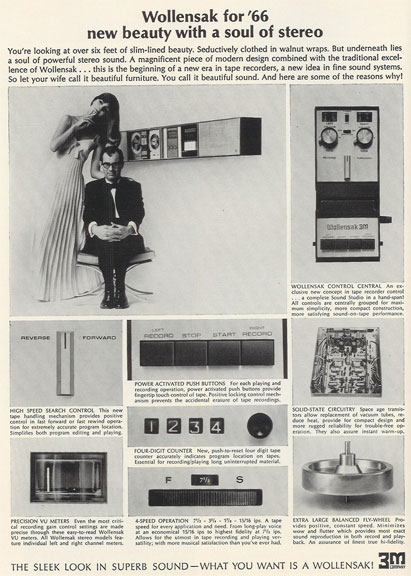 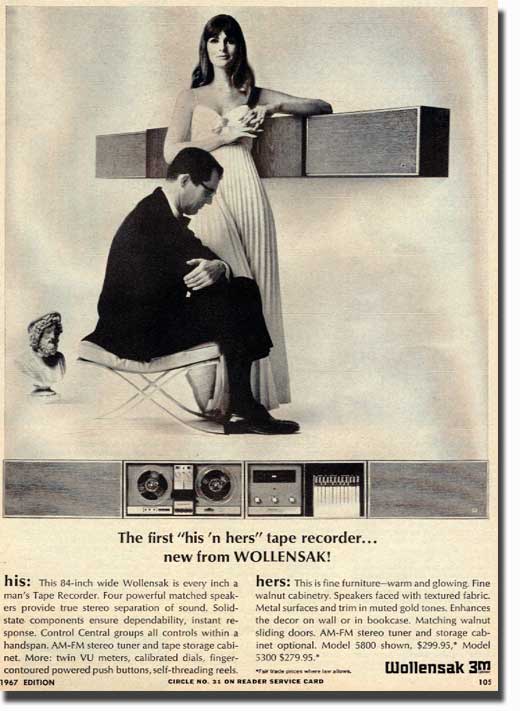 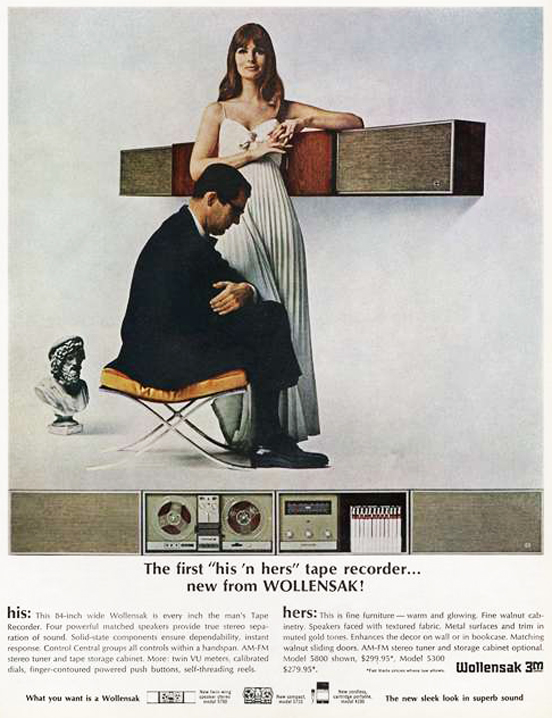 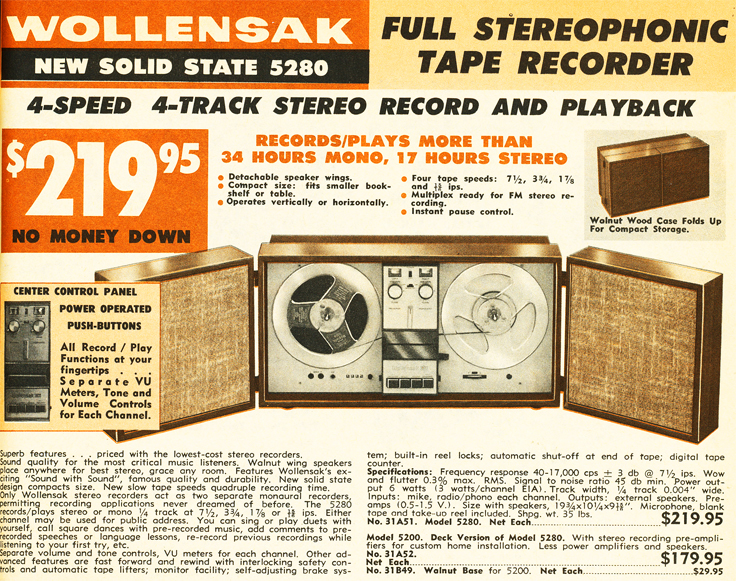 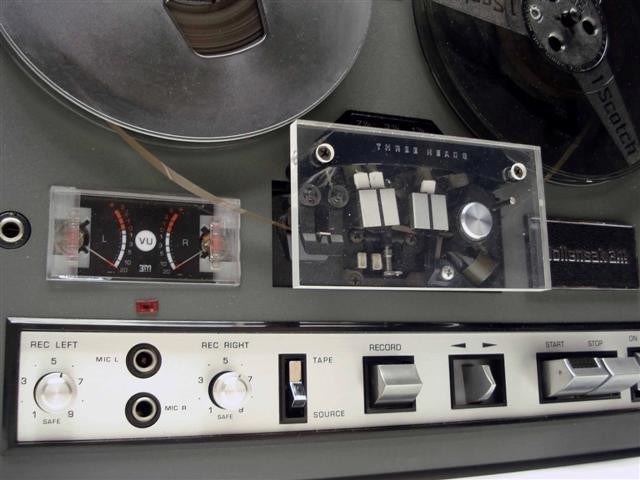 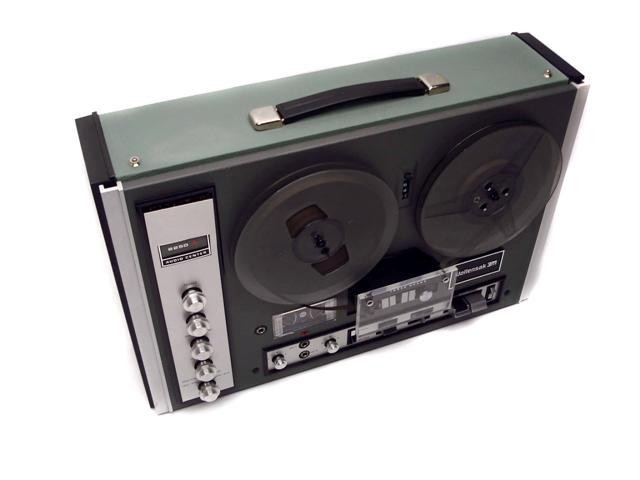 All pictures and content on this web site are the property of Phantom Productions, Inc.